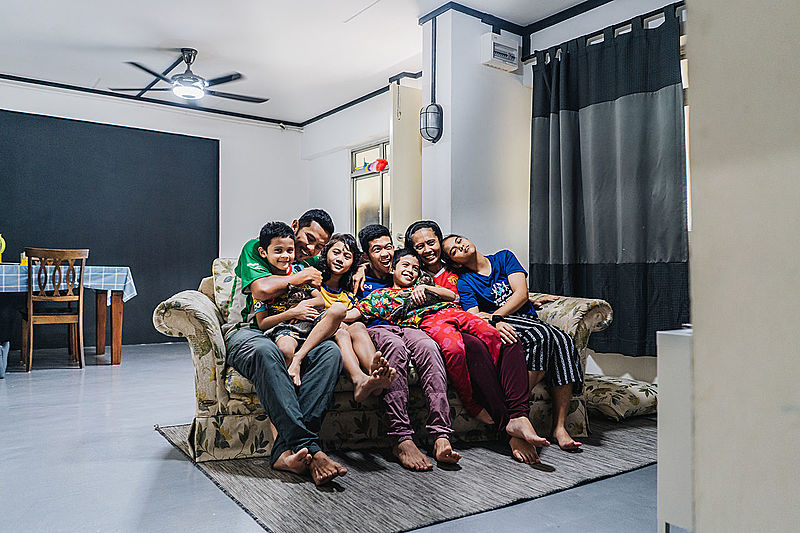 After almost 11 years of living in a rental two-room flat at Jalan Minyak, Mr Zulkifli Salleh and his wife, Ms Nurul Jannah Mazlan are now staying in a four-room flat.

They made the purchase and move in April last year.

The ability to purchase their new Woodlands home and move out of their rental unit was a dream come true for the couple who has six children ages between eight and 16.

With the single, foremost priority of improving their livelihood for the sake of their children, Mr Zulkifli and Ms Nurul Jannah, both 33, decided to double up on hard work and supplicate to Allah s.w.t for provisions and blessings.

“I told my husband that, regardless of what has happened or going to happen, we need to fix our situation and lead better lives,” said Ms Nurul Jannah.

“We cannot continue living in a rental flat because our children are growing quickly. A ‘one hall’ house is too small,” she added.

“Granted, we want our children to realise the difficulty and challenges of growing up with little, but we still want to have our own home. Alhamdullilah (we are able to now).”

“Our children gave us the motivation to keep working hard and be better,” said Ms Nurul Jannah who currently takes food and drink orders for eateries. Mr Zulkifli and Ms Nurul Jannah married at the tender age of 19 in 2006. Back then, Mr Zulkifli was still serving his National Service (NS).

After their marriage, they stayed at several places including their grandparents’ and parents’ homes.

“We had to wait till 21 before we could register our names for a HDB flat,” said Ms Nurul Jannah.

“From 2006 to 2008, we had to move around often and it was neither comfortable nor conducive for us. Hence, we shortened the period of finding a rental flat; we decided to settle on a rental unit at Jalan Minyak,” Mr Zulkifli shared.

By that time, the couple already had three children. 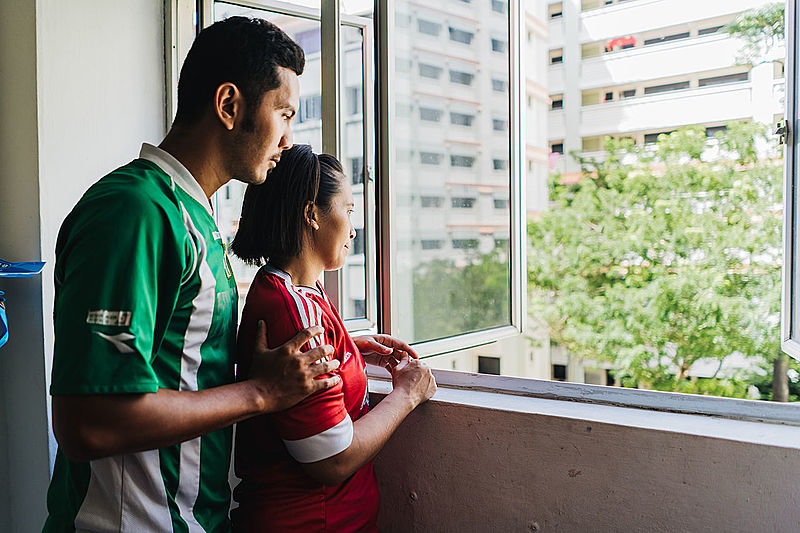 Mr Zulkili admitted that they had financial problems trying to raise their children when they first moved to Jalan Minyak. He had just completed his NS and he did not have a permanent, stable job. He was bringing home a meagre salary as a football player in the Prime League under the Geylang International Club.

Ms Nurul Jannah on the other hand, was not able to work as she had to take care of their young children.

The couple received temporary assistance from the Community Development Council (CDC), especially placements for the their children at the childcare centre. This is to allow Ms Nurul Jannah to find part-time work to support the family financially.

However, the assistance ceased after she started working.

“I got pregnant again when we were staying at Jalan Minyak. Our neighbour advised us to seek help from the Islamic Religious Council of Singapire (Muis),” said Ms Nurul Jannah.

“We decided to seek Zakat financial assistance at their office in 2009,” she added.

Fortunately, the couple’s request for assistance was approved and they started receiving Zakat assistance from Muis in 2010.

Mr Zulkifli also managed to get a permanent job as he started working under Cisco.

“The Zakat financial assistance has helped us incredbily, especially during Hari Raya. We were able to buy new outfits for our children,” said Ms Nurul Jannah.

According to her, they were also able to use the monies from the Zakat financial assistance for their daily expenses such as food and drinks, utility bills, public transport costs, and school pocket money for their children, among others.

“I was extremely grateful for the Zakat assistance from Muis as it helped eased our financial burden, more so during the year end. We had to spend more for our children’s school supplies,” said Ms Nurul Jannah.

Aside from the Zakat financial assistance, the couple’s children were also able to attend religious classes and other Ramadan programmes at Al-Falah Mosque.

However, the couple did not just rely on the Zakat assistance from Muis.

In 2017, Ms Nurul Jannah started working full time as a service crew at a local dessert cafe. This was after she was able to send all six of her children to the childcare centre through the assistance rendered by the CDC. 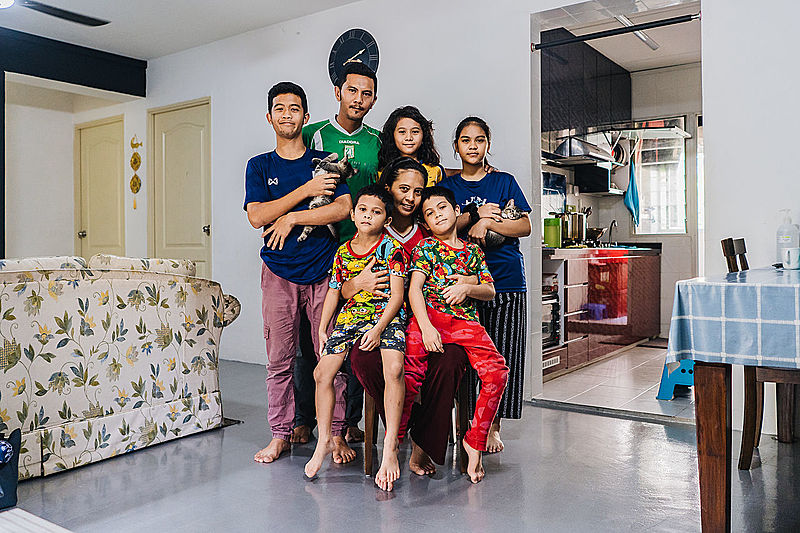 According to Ms Nurul Jannah, the couple had made a commitment to work as hard as they could to get stable jobs and secure contributions for their individual Central Provident Fund (CPF) accounts before requesting to buy a HDB flat.

In 2018, they decided to make the request after finding themselves self-sufficient.

“Before getting this house, we had made thorough calculations to ascertain that we did not need to pay for this house in cash every month. The mortgage was paid with CPF. We did not want this house to be a financial burden on us,” said Ms Nurul Jannah.

Now, the couple is no longer receiving Zakat financial assistance from Muis. The last assistance they received was in August 2019.

“Even now, we are still facing financial challenges but we are doing our best to control our spending. It is even more critical now as we are not receiving assistance anymore,” said Mr Zulkifli.

“However, alhamdulillah, our provisions were never cut and we are still able to feed our children. Even if it’s just rice with egg, we are still grateful,” he added.

“I always tell my children that although we are not wealthy, we are still sufficient. We are able to eat. We should be grateful and never complain.” The couple also always remind their children to focus on their studies and their passion.

The couple’s sons are interested in football while their daughters are very much into floorball.

“We support our children. We try, as much as possible, to be involved in their school programmes and activities. For example, if they are involved in games or competitions, we try to make time for that,” said Ms Nurul Jannah.

The couple is also very proud of their children for contributing to household chores such as doing the laundry and washing the dishes after coming home from school.

Aside from their financial worries, Ms Nurul Jannah was also facing another problem – she was diagnosed with stage 1 thyroid cancer in 2016.

She was informed of her illness after experiencing persistent soreness in her throat. She had undergone surgery to remove the affected thyroid and she is now cancer-free.

“I was very, very worried for the kids and my husband after finding out about my thyroid cancer. What would happen to them if I had to go?” said Ms Nurul Jannah.

“Alhamdulillah, my husband and my family members gave me a lot of encouragement and support throughout the entire ordeal,” she added.

She has to take medications for life after the surgery, on top of monthly checkups at the polyclinic.

Now, the couple only has one hope and that is to continue bringing in income to support their schoolgoing children. They hope that their children would grow up to be good people.

“What’s most important is that we do not forget Allah s.w.t,” said Mr Zulkifli.

Join our mailing list
SUBSCRIBE
Related Articles
A look at Zakat through history
Zakat.SG
How to Pay Zakat: A Guide to Fulfil Your Zakat
Zakat.SG
Ramadan Programmes 2022: Understanding Better the Third Pillar of Islam & Its Practice
Zakat.SG
What happens when we pay Zakat?
Muslim.Sg